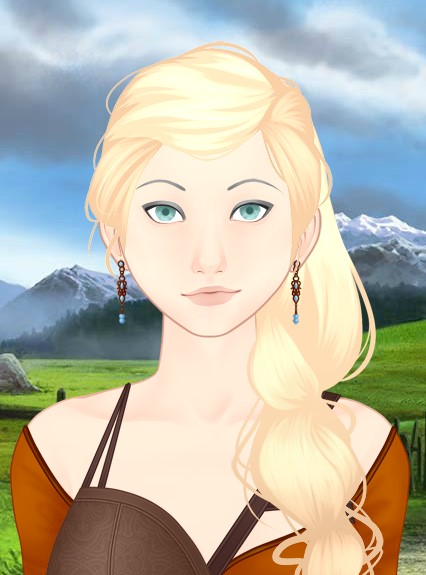 Appearance: Bright, sparkling, and soft as new fallen snow.  Fair skin that looks like it has never known daylight, white-blonde hair like arctic sunbeams, and eyes the cool green-blue of the heart of a glacier.  A bit softer in figure than your average adventurer, middling height, and unarguably beautiful.

History: For all intents and purposes, Vreni’s life began at the age of four.  Or, at least, they’re fairly certain she was four.  That was when Vreni was brought to Gray Spire by a merchant caravan, bearing a letter which was sealed not with wax, but ice that did not melt.  One look at the girl and there was little question as to what the letter likely said – although much paler than the golden haired, blue-eyed lord of the mountain, there was no denying she was his child.  Count Adelhelm never shared the contents of the letter with anyone, but welcomed the girl into his home with more enthusiasm than most bastard children could ever hope for.  She arrived with the first snow of winter, and the combination of this given her complexion led to a number of fantastic stories about what kind of ice-blessed creature her mother must have been.

Vreni held a strange position of mixed privilege within Gray Spire.  The prinz had welcomed her into his household, but there was no getting around that she was a bastard.  She did not sleep in the royal wing with the rest of the family, but was still fortunate enough to have a room in the castle.  The servants did not show her deference, and she saw to her own care far more than any of her siblings, but those within the castle were mostly kind.  There were many reminders of the prinz’s travels and cavalier youth, back before he returned home to settle and rule.  In many ways, Vreni was just another one of these momentos – prettier than the grisly statues from the coast, more trouble than the over-large cat that had to be kept warm all the time, and to the gentry’s eyes about as useful.

Adelhelm found members of his court to be less accepting than he would have preferred.  The tutors whom he had hired from the capitol to teach his children refused to take on the “half-breed byblow”.  While the particular tutor who uttered those words found himself sacked shortly thereafter, the other ones expressed the same reticence in far more cordially tones.  It would damage their reputations, they explained.  The prinz decided to take it upon himself to educate the girl.  His wife, Maylora, had died the year before Vreni’s arrival and Adelhelm found solace in raising his surprise child.  A young monk from the nearby Temple of Auril was brought in to teach Vreni language, writing, and maths.  The prinz taught her combat, diplomacy, and how to utilize her charm and appearance.  He also taught her how to play a variety of instruments.

It was during these music lessons that Delmi first started to pay attention to her sister.  Jealous of the time their father was spending with Vreni, Delmi demanded he also teach her the mandolin.  Adelhelm informed his daughters that he was only giving one music lesson a day, so if Delmi wanted to learn, she would have to learn with Vreni.  Delmi was irate at first, particularly since Adelhelm refused to treat the two girls any differently when they were together.  Vreni also didn’t love having her lessons interrupted by someone who, in Vreni’s mind, already got enough attention.  Still, Delmi was a sweet soul at her core, and in less than a year the two were almost inseparable.  They became known as “the twins”, for they went everywhere together (everywhere that Vreni wasn’t barred from), and appeared to be of an age.

When the girls were around 17 or 18 years of age, Talluin Aimar came into their life.  The eldest son of Gray Spire’s closest neighbor in Jayard, Talluin was a few years older and far more traveled than either of the girls.  He was also a rather handsome young man, with hair like a raven’s wing and warm amber eyes.  He would attend courtly events with Delmi, then hide in the tower with Vreni talking late into the night about the places he’d been as Vreni played songs.  The girls had a bit of an inkling that he was courting them both, and an unspoken agreement not to discuss it.

In the end, propriety won out.  Talluin was his father’s heir, and there was no future for him with a bastard.  The arrangements were made while Vreni was at Auril’s temple, having made a trip to visit her old tutor, and she received the summons home to attend the engagement gala.  Talluin’s choice was a bitter reminder of her place in the world, and a lesson in the hearts of young noblemen.  Whatever private anger or loss she felt, Vreni tempered her heartbreak and found it within herself to genuinely wish the couple well.  She loved Delmi more than she longed for Talluin.

The two were wed in short order.  While Vreni was not allowed to be one of her sister’s attendants, her father did defy his court and their prejudices enough to have her play during the ceremony.  Then Delmi was gone, down the mountain to her new husband’s lands near the Rylen border.  Vreni disliked the arrangement for two reasons – one, it took her sister and only real friend away from her, and two, the border was not the safest place right now.  The war had already begun at this point, which was a strain on the Aimar holdings (and part of why Talluin’s father had sought an alliance).  It was also well known that Lord Aimar did not entirely agree with the war, and though he did his duty by his country he was losing friends at court.  The Greis family would be a valuable ally, as Gray Spire was quite secure and stable despite the fighting, and Adelhelm had gone out of his way to curry favor with the king.

A year after the wedding, news arrived in Grey Spire that Castle Aimar had been attacked.  Baldemar took a contingent of his father’s militia and headed down to investigate.  Vreni went with him – she had spent the better part of that past year sulking, reconciling her feelings for Talluin and resenting Delmi’s absence.  When the courier arrived bearing news of the attack, Vreni was the first ready and mounted to make the journey down the mountain.  Baldemar had tried to argue, but he also understood Vreni’s love for Delmi, and capitulated quickly.  Baldemar also knew his half-sister well enough to know that it didn’t matter what he said, she would go either way.

The three day ride was filled with tension and fear for what they would find.  Sadly, their fears were perfectly justified.  They arrived to a horror – the castle and surrounding farmland had been razed.  First glance implied the Rylen army, but both Baldemar and Vreni agreed that it didn’t make sense.  This was farmland, and armies needed to eat.  They would have sacked the place, not destroyed it.  Store rooms had been burned still full of grain.  There was something else behind this attack – the war was a convenient scapegoat.

Vreni found Talluin dead at the gate, his sword broken, having bled to death from his injuries. The crows had already gotten to his beautiful amber eyes, and rain had filled the empty sockets.  When Vreni closed them, the rainwater trickled out as if Talluin were crying.  Delmi she found inside – partially immolated from the fire that had decimated the castle.  Vreni had collapsed in the ash next to her sister’s corpse in silence, too shaken to do anything other than cry.  Delmi’s chestnut mandolin lay next to her, the beautiful finish covered in ash and soot.  Sobbing, Vreni picked up the instrument and tried to clean it.  The gray-black would not come off, and her tears slowed and then stopped as she realized it was warm and miraculously whole.  The strings had not snapped in the heat, the body and neck were sound, and there was something else.  It…felt like Delmi.

Vreni took the mandolin out of the castle, and retrieved Talluin’s broken sword before returning to her father, leaving Baldemar to contact the capitol and deal with whatever happened next.  A month later, she would leave Gray Spire, promising to come back when she had answers and the pain was less raw.  It would be another nine months before the King’s envoy contacted her, promising money and information for her service to the crown.

A bit about Gray Spire:  Gray Spire is a mountain holding that was once it’s own kingdom some seven generations ago before joining Jayard.  It is right on the Rylen border, and one might think they would have joined the other country, but reaching Gray Spire from the Rylen side is incredibly difficult.  Gray Spire Hold is an impressive and sprawling stone structure that contains not only the main keep which houses the royal family but Gray Spire’s garrison and the village that homes the ranchers and spinners who help maintain Gray Spire’s primary export.

Gray Spire is a place of tradition – while Adelhelm holds the title of Count by grace of Jayard’s king, the people of Gray Spire still refer to their ruler as the Prinz (or Prinzessin, as women are permitted to rule when there are no male heirs).  It is generally acknowledged that the people of Gray Spire are loyal to Jayard because the Prinz is loyal to Jayard, and many would be just as content for them to return to being their own little country again.

Despite its vastly inconvenient location, Gray Spire has done a valiant job of remaining current.  This is almost entirely due to Adelhelm’s efforts – he regularly hosts ambassadors, throws festivals on high holidays (the Gray Spire Midwinter Feast is particularly popular, and became an invitation only event in the past decade), and sponsors poets and artists to come spend a season in the keep.  Gray Spire’s production and export of an exceptionally soft wool has kept them quite comfortable, and despite some youthful tendencies that once made his elders nervous, Adelhelm has proven himself to be a dedicated and intelligent ruler.

(Image made with Rinmaru Games Fantasy Avatar Creator, because I can’t draw and didn’t have time to commission anything.)

(And stock footage of mandolins is sadly lacking.  Particularly black ones.  I mean, damn.)