Greetings, dear readers! Have you ever been to PAX?  It’s an experience, let me tell you.  For those of you who are not familiar with PAX (Penny Arcade Expo) because you’ve been living in a bunker or something, it’s a convention that was put together by the creators of Penny Arcade – which is a comic I fully admit I didn’t really read, because I don’t think white boys whining about stuff is all that funny, but it has its moments – and it is all about the video games.  Originally there was one PAX, but now we have PAX West (the original), PAX East, PAX South, PAX Aus, PAX Unplugged, and PAX Dev.  It’s a monster.

So, before we dive in, the elephant in the room – there is some resentment around PAX, because it is argued that indie developers can’t expect their games to succeed if they can’t make it to PAX, and the guys at Penny Arcade have stepped on a number of toes over the years.  Some indie developers would like to boycott the con, but also admit that it might be financial suicide to do so.  Also, as PAX became more popular, it has pulled away from its more idealistic roots.  Based on Bandai’s staff a couple years ago, the booth babe ban is no longer in effect, and the biggest exhibitors are often companies like Razor and Corsair and anyone else desperate to sell you their shiny computer and gaming tech.  All that said, it’s an incredible experience, and a ton of fun, and I am so, so grateful I got a call late Friday night from friends asking if I wanted their spare Saturday pass.  Hell, yes, I did!

So, let me give you a couple super quick PAX highlights!  To kick things off, this guy was waiting outside when we arrived at the Washington State Convention Center.  Now, I don’t play PUBG, and likely never will, but this still got me excited.  I love a good production – ridiculous props, elaborate sets, solid actors, these are the things that I get excited about, and probably one of my favorite parts of PAX.  To further illustrate my point, let me draw your attention down to exhibit B, the straight-from-the-game animators studio that they set up for the Bendy and the Ink Machine booth, complete with a stellar Alice cosplay and my hair that just wasn’t having it that day despite my best efforts.  I mean, really, I got up early to shower, used product, did everything right, and it was still a flat, frizzy mess by the time I got downtown.  I even skipped makeup because I spent so much time trying to make sure my hair wasn’t awful.  I’m rambling.  Right, back to the expo. 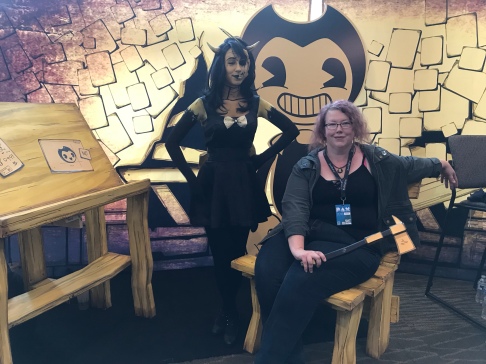 The main floor is just a labyrinth of booths and I wish the following picture was a better representation of the size of the exhibition, but without being able to get up to a height, tiny little me can’t get a much better shot than this.  And this was only one half of the main floor.  Not even the larger half.  That also doesn’t include the additional floors, and the events in the neighboring hotels.  Heck, one of the panels I went to was down in Benaroya Hall (a large theater/music venue about seven blocks away for those playing the home game). 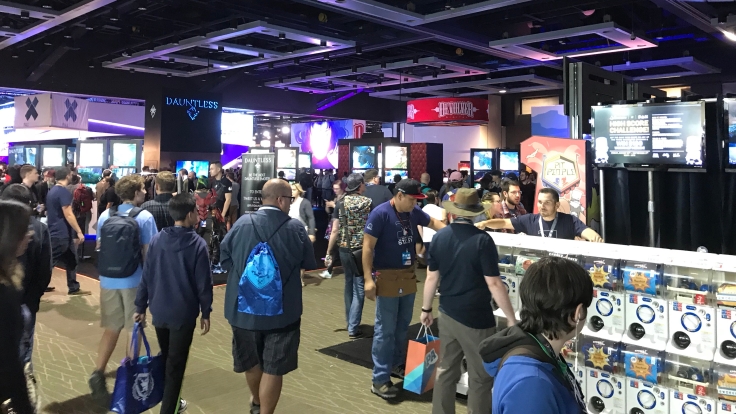 At its core, what PAX brings, that all conventions bring, is the hands on interaction with your fandom.  PAX just brings it at Vegas levels, with lights and sound and larger than life displays.  Much like heading to Disney World, you’ll burn out if you try to hit the whole event in one day.  I didn’t see half the panels I wanted to, and completely missed the Monster Hunter Cafe truck, and by the time I left I could barely walk.  That did not diminish the experience in any way.

If you ever get the chance to go to PAX, go.  Try to get at least two days worth of passes, but if you can’t, just take the one day and enjoy the experience.  It is something to see and breathe in and marvel at, a colossus of geekery and commercialism.  I am ecstatically happy that I got the chance to go this year, and I daresay you’ll see a few articles in coming weeks about games I found on the expo floor.